My basic theory is that humans are social by nature, and there is such a thing as social health. We are genetically or instinctively intended for that social health. Harming one another (especially in families) is not a feature of social health.
Abuse of one another is not entirely human in origin; in effect, it is analogous to a disease. The disease causes people to treat others as they have themselves been treated, and in that way, it is contagious. We could compare the whole process to that of a virus, although I wouldn't guess that the "virus" that causes interpersonal abuse is a physical microbe like chicken pox.
A virus is a name for a piece of information which directs unwanted or destructive behavior. A biologic virus is a piece of genetic information that causes a cell to do the wrong thing. A computer virus is a piece of code that causes the program to do what it was not designed to do.

When I say that the cause of sexual abuse can be thought of as a virus, I am saying that sexual abuse is caused by twisted thought, usually held below the conscious level. Thoughts or decisions about reality get saved in our deep memories and we may not even know they are there. Then those contorted thoughts become hypnotic suggestions that, under the right conditions, become truly irresistible, and people find themselves saying "I don't know what came over me."

I want to give an example of how a string of beliefs can pave the way for bad action. The following is a cartoon showing one kind of interpersonal virus: incongruent sex. I shall define incongruent sex as the event of penetration with the woman's consent, but without the woman's biologic arousal. 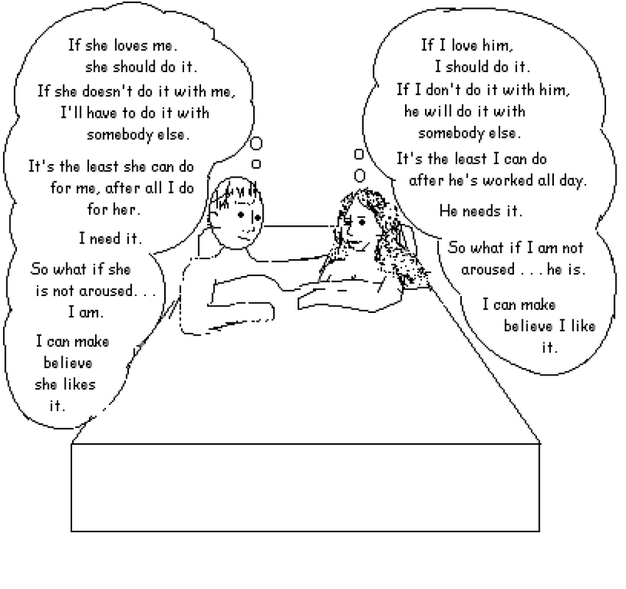 ​She has reasons to say yes. She has reasons to feign interest, arousal, or orgasm. We might say that so long as a woman says "yes" that no harm is done. But there are at least two levels of consent that matter in sex, both body and mind have to say yes before the experience is healthy and whole. The body says yes, by being aroused. The emotions say yes by trusting. Wholly consensual sex is lifesaving, builds up resilience in the nervous system and allows us to revisit grace, for goodness sakes.

Good sex experiences are events of the whole person, our conscious identities, our experience of relationship with our partner, down through the emotional layers into the physical nervous system, the endocrine system, respiratory and circulatory systems, everything . . . not just bits or parts of who we are. Good sex experiences feel like a big deal. But incongruent sex feels about as special as folding laundry.
When people have intercourse even though the woman is not physically aroused, it is certainly not rape, as consent is plainly there. But it is on the spectrum of rape in that the woman's body has not been given a vote in the situation.

If arousal is not there, her body is not saying yes. Regardless of her friendly-sounding verbal consent, an event of incongruent sex does affect the whole physical, emotional, and spiritual human beings. While healthy sex is strengthening for the human nervous system, incongruent sex is, not so much. It can be like running the wrong kind of current through delicate circuitry.

​Consider these word balloons of unspoken thoughts. If you cover up the woman's inner dialogue and just look at what the man is thinking, you might think "what a creep that guy is." You might dislike him, or worse.

If you cover up the man's inner dialogue and look only at the woman's thought, what do you think? What do you feel?
What I don't think is "what a wicked person, what a rapist," like I might of the man. I don't want to assume too much about your reaction. But did you have a different evaluation of her thought balloon, different than of his?

Since the thoughts truly are identical, just flipped around, how is one more bad or good than the other?  Objectively, they are the same, are they not?

We have our religious and cultural messaging that says, “harming another is evil” but “harming myself for another’s benefit is noble and virtuous sacrifice.” I call bullshit on that distinction.  Real social health does not involve harming anyone, including ourselves.
That constellation of thoughts, in either head, is an instigator of interpersonal violation. That constellation of thoughts is a behavioral virus.

Is it possible that both persons in the cartoon got to thinking that way by being somehow damaged? If that was a childhood injury, we'll all agree that the injury was not that person's fault. In effect, both people have caught a disease. They have a virus that is made up of misleading information - which prompts destructive action. They both actively discount the body language of the female person.

Feigned-interest sex, as a class of events, is the most accessible layer in the whole web that is the structure of rape culture, the medium that breeds CSA.

It is so appealing to project the battle out there, saying "he's the sick one" and then launch into attack. Well, guess what. That is the disease doing the thinking, even in me. Our first job in dismantling rape culture is to recognize and unravel this material in ourselves.

This is a complicated subject and probably triggering to many. I found it empowering to place an objective map of the scenario in my mind, so I drew this cartoon. Healing out of this pattern could very well make you incompatible with your current partner, or possibly, it could open a whole new healthier experience for you and your partner together.

What would it take to drain the power out of the words in the woman’s thought bubble?  What changes in our circumstances would we have to make, to support women being able to say “not right now, no thank you” in an easy breezy way, without blowback of some kind? Could it be possible that prevention of serious child sexual abuse would also fall into place from those very same changes?

How much we depend only on a significant other keeps dysfunctional patterns in place. In the absence of what our instincts expect to be tribal and peer support, our dilemma is financial, it is social, it is religious, it is cognitive, it is logistical, it is subconscious programming, it is everything, it is rape culture.

I can feel the pillars of toxic civilization quaking, imagining what it would take to remove that dependency. Teaming up with a circle of friends, we could remake the village our genetic blueprints expect.

The amount of dependency, and codependency that we are trained to experience is a huge part of the machine holding sexual damage in place. Our social and economic circumstances help us live healthy or not.

Our outer circumstances of options, and inner landscape of definitions, form a social immune system that is either working to enhance our lives; or if not, perhaps has thrown the fight and become an auto-immune disorder.
NEXT:  The Necessary and Sufficient Confrontation