The challenge for me in my family and courtroom ordeal has been to stretch my synthesized map of reality so that I can place these events within my certainty that Love rules the Universe - and have it all still make sense. And it does make sense to me now. I’ve had faith that somehow, some big blessing will come out of this. I believe in life. I believe in Love. I believe in human connection with Christ-mind when we reach for our full human potential.

This conundrum can be our call to wake up.

At first it seemed so diabolical for these children; the ones who have been condemned to chronic assault by way of the courts. But if we really think about all of it, we see that these kids are just the visible layer of all the kids who are stuck with the problem of ongoing sexual exploitation within the denying family.

What we have seen in such graphic detail in contested custody cases is like an “exploded view” in a technical repair manual. This is what goes on in any incest home. Child tells, tries to tell, things go badly. Except that in most incest homes, both parents line up against the child from the very beginning.

When there is courtroom drama and publicly compounded incest, the system of “virus-mom” and “virus-dad” is splayed open. We see the parts of the dysfunctional family, so much more clearly. Let’s use this opportunity, let’s study the system as it is laid out before us. We can’t be healers if we run screaming at the sight of disease. And I decide to be a healer. I invite you to be a healer, too.

Infecting a person with Acquired Unconsciousness is done by attacking every one of the six steps of consciousness. With this series of attacks, a “no way out” situation is created for the child, pain is again applied, and the child’s consciousness becomes disabled.
One result is that the child fails to make another report when another assault occurs. The basic bonding and healing instinct to tell another about what is going on is conditioned away.

That children decide not to tell again is not remarkable. They aren’t stupid, they do learn. But what is remarkable is that when the outer report to other people is silenced, the inner report within the child’s mind becomes silenced as well.

The nervous system of the child is programmed to process the sensory report of the assault in the same way that the outer report is processed by the community: by disregarding it.

The child becomes experientially unconscious of all or part of the assaults. When whole chunks of personal history become inaccessible to memory, it is called normal childhood amnesia.

This exact mechanism is how and why so many people repress awareness of childhood sexual abuse until well after the assaults take place. I didn’t have to go through a public investigation and custody trauma when I was a child, to become unconscious of my childhood rape experiences. I was stopped early in my healing efforts to report. I knew better than to try to talk about anything sexual at all. That itself was against the rules.

All the same things happened, in essence and in collapsed time, to me in my intact family and to my daughter in her broken home. She was taken away from her mother by family court. I lost my mother too, even though she was there in the house every day. The wall of silence between us was insurmountable. We did not talk together about much of anything, did not share ourselves with one another. But this much, we shared: she did not see what was happening to me, and I did not even see what was happening to me. The wall of silence came right into me.

The result of the completed disease process is unconsciousness. One is unable to perceive, understand, unable to act to make positive change. Learned helplessness is a recognized part of the terrain in a battered women’s shelter.

But the unconsciousness left over from childhood sexual assaults doesn’t confine itself to one little segment of the person, their love life. It can spread and affect all areas of our lives. A person who has some form of Acquired Unconsciousness may live with continued deprivation or violence. They can’t think of ways to make change; it is like specialized paralysis.

We might call it a sleeping sickness of the soul - the impulse to heal and reach for joy has been put to sleep. This impairment of our consciousness even spills over into physical immune system weakening. Again, note the similarities with Acquired Immune Deficiency Syndrome (AIDS). Little diseases that healthy people are very well equipped to handle, become unsolvable.

When I read the news about our global scene, I can’t help but see our whole society behaves as if we were unconscious. Denial and idealization are rampant. False pictures of reality are the order of the day. Responses that don’t help happen all the time. Circumstances keep going from bad to worse.

Destructive industry doesn’t really meet our needs at all. Corporate earth-raping exists to exploit the “little people,” while the powerful pose as providers.

Our current society, hellbent on destruction, relies on the foundation of Acquired Unconsciousness widespread in the citizenry, to keep the exploitation intact. However, we should not believe that all Acquired Unconsciousness is caused by childhood sexual assault. Any pain in relationship that is not resolved, and is repeated, can create twisted thinking.

This experience with backlash about reporting sexual abuse gives us a precise example of how the pattern of Acquired Unconsciousness works. The system of hurting someone, not letting them tell or cry about the hurt, not letting them bond with others to heal or prevent more hurt - and telling them lies about the whole situation - disables people in all kinds of ways.

It damages their innate intelligence. Intelligence is another name for consciousness. There are all kinds of ways of being smart or intelligent. But being smart in school tests is beside the point when we are trained at home to ignore and not solve the big problems in our real-life situation.

Incest is only one of the big injuries that America trains its children to absorb, to tolerate, to not expect to solve. Being stuck with loneliness, poverty, parents who are drunk day and night, crime on the streets, parents who argue over everything, you name it - kids live with it. They (we) must resign ourselves to the only solution available, which is learning to shut off awareness of the problem and the pain.

When a problem is big it can take a huge amount of creative intelligence to shut it out! And the ironic result is that we human beings are trained to use our huge natural intelligence, devising fabulous ways to make ourselves stupid. Stupidity (stupor) is another word for unconsciousness.

One way to stop paying attention to the problem one cannot master is to pay special attention to something else - something we can have control over the results. Switching to some other kind of narrow focus may appear to solve the other problem, in that it can distract a person from the pain.

With that balance of selective unconsciousness / specialized (pinhole) consciousness, we bring that habit of letting the real problems go unnoticed while we busy ourselves with fighting windmills, chasing grades, making the next level in that video game, living for approval and symbols of success like a big and bigger paycheck. Fancier toys. It is the American way.

The fundamental and underlying problem(s) thrive unhindered, while our leaders busy themselves with debate, band-aids to cover symptoms, or arguments that are simply beside the point.

All the problems in the world can be solved by healthy human intelligence. The only real problem we all have is the epidemic of inability to face facts: contagious Acquired Unconsciousness.

What collective catharsis can lift our awareness and firmly establish our innate ability to make positive change?

Simply presenting the dire facts does not instigate healing. In fact, if you push convincing evidence on those who are locked in denial, it just causes them to cling even more fervently to the false image. Disturbing facts just retrigger the mechanisms of unconsciousness.

There is a healing potential, though. Here is the blessing that comes out of this curse of court-enabled compounded abuse. We are led to go deeper and learn the mechanism of the entire problem. We see not only the root of sexual abuse - but the setup for all the unsolvable problems our culture is brewing.

Acquired Unconsciousness is a disease, like a virus, which has contaminated all of humanity. The disease is directing people to do things human beings are not naturally designed to do.

There is a natural Immune system that supports health in consciousness already inherent in our instincts and even, potentially, in the institutions of America. The solution is contained in the application of basic human rights. 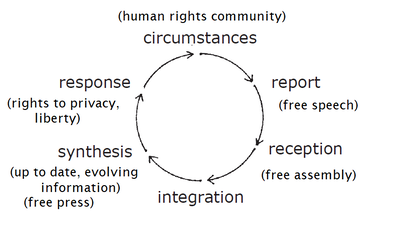 Report is free(d) speech. Reception is embedded in the practice of free assembly – finding the people who can listen well.
Liberty and privacy allow flexible response. Pick up your own Bill of Rights and embrace these basic directions into your very own life. This is the foundation of our cultural healing.

The US Constitution with clearly defined basic human rights is part of the circumstance that can deliver context, the strategy, and the means for our healing.
​
All we have to do is recognize and apply it. True guarantees of human rights, within the domestic scene, only happen with community support. We can establish community ground-rules that enshrine and express the values of applied human rights. ​